Decoding Venezuela: Why South America’s most prosperous country is in socio-economic conflict

Venezuela is located in northern South America and borders the North Atlantic Ocean and the Caribbean Sea, between Guyana and Colombia.

In 2014, mining and extraction of minerals contributed 26% to the country’s GDP, Venezuela is also the largest exporter of oil after the OPEC (Oil Producing and Exporting Countries).

It holds a prominent location in America, being the wealthiest country but its geo-location also makes it an undeniable threat to the American mainland.

Since 2013 Venezuela has seen no economic development, rising prices with inflation rates of 10 million%, considered by many as one of the worst cases of hyperinflation. 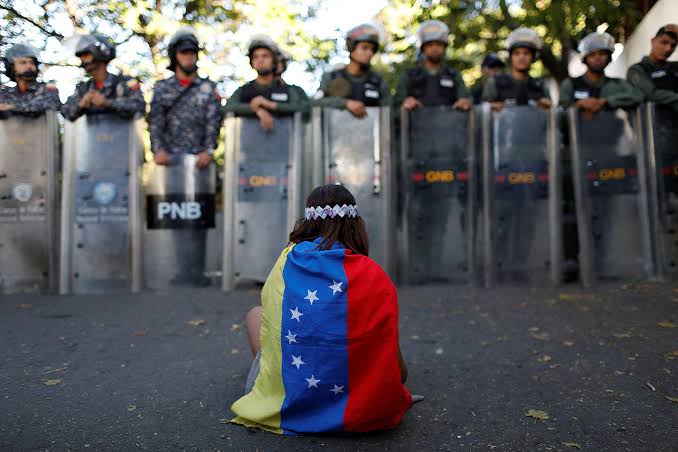 Nocolàs Maduro assumed power in 2013, shortly after the demise of his mentor and leader of the country, Hugo Chavez. Maduro has overseen the unravelling of the economy. While he has blamed the United States imposed sanctions for the economic downfall. Experts both inside the country and outside have blamed government mismanagement and high-levels of corruption for the current conditions.

Maduro has wrested the power in the government’s executive branch, suppressing dissent through violence and intimidation, winning the confidence of the military and giving favourable deals to corporates.

South American countries seek a huge contribution from the military in the functioning of the country. Especially, because the military holds the power to remove the leader in such circumstances by a Coup d’état.

In 2017, when Venezuela got engulfed with nation-wide protests, Maduro side-lined the opposition-controlled, legislature, the National Assembly, and ordered the creation of the new legislative assembly called, the Constituent Assembly, which he asked to re-write the constitution.

He jailed prominent members of the opposition, leaving it largely ineffective for many months.

In May 2018, Maduro won re-election to a new six-year term in the midst of a financial and humanitarian crisis. Coercion and vote-rigging were widely reported. By the time of his inauguration on Jan. 10, many countries did not recognize his new term as legitimate, including the United States, Canada and a dozen Latin American nations.

What are Venezuelans going through?

And this is taking its toll on the nation’s health.

As a result, Venezuelans are turning to forgotten vegetables and foodstuffs that were once considered a “poor people’s food”.

The yuca – or cassava – root vegetable, for example, is versatile, cheap and a traditional substitute for potatoes.

It can be boiled or fried – which fast-food chain McDonald’s used to its advantage in 2015, changing their Venezuelan menu from potato fries to yuca fries.

Venezuela was the first country to eradicate Malaria in 1969, having been located in a tropical region, Venezuela has malaria cases in 10 states out union’s 24. The Venezuelan Health Observatory has reported widespread shortages of antimalarial drugs – for all strains.

Three million Venezuelans have left their home country since 2014, according to the UN.

Who is Juan Guaidó? Is he Venezuela’s only hope?

Largely unknown before the National Assembly elected him as its leader. A vocal critic of both Maduro and Chavez. Juan became politically active as a student leader in Caracas and leading protests against  Chávez’s clampdown on press freedom.

His party has taken a hard-line stance against Maduro’s government, organizing street protests and rallies.

Guaidó also has visited Colombia, Brazil and other sympathetic neighbours in Latin America, in defiance of a travel ban. He is under constant threat of arrest.

Just two weeks after, the swearing-in of Maduro in January early this year, Juan declared himself as the interim president with wide support from the public rallying behind him.

Such was his effect, that the United States accepted Juan as the new Venezuelan leader. Maduro responded by severing ties with the United States and blocking the humanitarian aid from countries like Colombia and Brazil, by sealing off the border.

He rallied in public areas to get the backing of the military, military however still remains loyal to Maduro.

He also attempted a failed move to take over the power with little military support but since then Maduro has grown stronger and virtually unstoppable.

The majority of those leaving have crossed into neighbouring Colombia, some then move on to Ecuador, Peru and Chile. Others have gone south to Brazil.

All United States allies recognise Juan as the legitimate leader while Russia and China condemned foreign support for  Guaidó, saying it violates international law and is a “direct path to bloodshed” and support Maduro.