I Serve the Soviet Union: Story of Men Who Cleaned Up Chernobyl

On April 26,1986 when reactor number 4 of  Viktor I. Lenin or commonly known as Chernobyl power plant exploded, many were sleeping safely just 10 Kilometres away in Pripyat city.

However, there were some good men that day in the Soviet Union that did the best they could to avoid something like this again.

It’s just a roof on fire

The initial news of the explosion broke out when all firefighters’ units were called upon, underscoring the seriousness of the situation many were informed that only the roof was on fire.

These firefighters, who didn’t know the scale of the incident were the first ones to arrive at plant number 4 to put out the fire.

They didn’t know that they were meters away from the world’s most radioactive thing. Many of them unaware of the debris held in their hands that they thought were rocks.

Actually, they were not rocks they were the graphite remains of the reactor’s core….. The most radioactive thing in the nuclear plant.

These firemen were rushed to civil hospitals once they were exposed to the reactivity and till now the abandon clothes of these firemen remain in the basement of Pripyat’s main hospital which one of the most radioactive places on the earth.

Remember, the radioactivity from the clothes turned the basement into one of the most hazardous places on the earth, these firefighters fought the blazing reactor core for the first six hours.

The Truth that can’t be held back

Scientist Valery Legasov, who guided the state from ground zero to fight the open reactor core and how to save millions of lives.

He lied to the International Atomic Energy Agency under pressure from the Soviet Union but in his domestic hearing, he told pin-pointed truth that was hard for most of the senior leaders to digest.

He said that it is the state’s obsession with lies and money-saving that caused Chernobyl. He also said that Anthony Dyatlov, the plant manager just wanted to report a complete test so he risked it all.

He mentioned that 36 reactors still operated with flaws in the Soviet Union at the time and three out of four reactors of Chernobyl still run with some flaws.

He was also the sole reason behind the damage-control, having succeeded in getting Pripyat evacuated, he did everything within his reach to save lives.

He was awarded ‘Hero of the Soviet Union’, the highest civilian award for his efforts however later pulled back because he exposed the lies in front of the entire Soviet Union.

All this while, He was helped by a thick-skinned party official Boris Schebrina, who fought his way out with senior-most party officials.

He didn’t understand how a nuclear reactor works but made one of the best prosecution cases during the domestic hearing.

He didn’t like Legasov and was tired of his unending questions but he did everything to assist his scientist friend.

Schebrina got him earth diggers, moon rovers, tons of boron and sand and everything Legasov needed to better the situation.

Schebrina and Legasov became good friends by the end of the entire clean-up and domestic hearing.

If it wasn’t Schebrina, Chernobyl’s story would have had a different twist, it would still be breathing out the radioactivity.

Men Up and Under

These are brave men who risked their lives voluntarily to save millions of lives spreading across 26,000 KMs including Russia, Ukraine, and Belorussia of that time.

These are two different groups of people who did something that other humans could have never done.

They had to go in because the water present in pumps that keep the reactor cool and ensure the continuous water flow through the reactor was full and the melting reactor fuel could have led to the world’s largest thermal explosion, affecting the lives of half the Europe.

To see the light of the day, they came out alive and lived a healthy life. Two of the still continue to live without any side effects of radioactivity.

The other group of people went on the roof to shut the reactor down by throwing debris into it. They went to the roof of reactor number 3 and threw graphite into the open core. These brave people had 90 seconds to do so in shifts and if they had taken 91 seconds, their life expectancy would have been only three more years.

And finally, come to the men who dig tunnels under the reactor core at 50* Celsius who originally were coal miners. These people dug the tunnel to place the heat exchanger to stop melting radioactive fuel.

For them it was nothing new, it was ordinary work a many of them had worked for at least 30 years in a coal mine without any breathing equipment, 3o years all that coal dust went inside their lungs and now it was radioactive air.

36 hours into the disaster it was decided to utilize helicopters to assist in stemming the radioactive matter pouring into the atmosphere.

Helicopters were sent from Siberia 4,000 kilometers from Chernobyl to dump hundreds of tons of sand, lead, clay and boron directly on the remnants of the exposed reactor at the Chernobyl plant. The mission was simple for the helicopters: close the nuclear wound exposed in the initial explosion.

In time, the exposed reactor would be enclosed by a sarcophagus of concrete that would later be rebuilt with reinforced steel to prevent the leakage of radiation and prevent any potential flare-ups from the still smoldering radioactive material inside.

The response to the disaster required many different helicopter types. In all, five helicopter types were used in the response to Chernobyl: the Mi-2 Hoplite, Mi-6 Hook, Mi-8 Hip, Mi-24R Hind and the largest helicopter in the world, the Mi-26 Halo. In addition to initial fire prevention tasks, the aircraft were also used in support of the “liquidators” operations to complete construction of the concrete sarcophagus used to initially contain the radioactive material. Each helicopter had a specific task during the crisis response.

On the Ground and On the Move

Many in the Soviet Army were directed for more humanitarian work. They were tasked with evacuating everyone in the exclusion zone door to door.

Just to refresh, the Soviet Union was a socialist economy and therefore heavily relied on animal husbandry.

All the animals, pets or otherwise were shot dead as they were contaminated. This army included many 18 years-old who for the first time were holding guns, they were soon to kill puppies, kittens, cows, goats, horses, dogs and cats.

They threw these bodies in a ditch and covered it with cement.

These are some extra-ordinary stories of men who tried to help what Dyatlov, Fomin and Bryukhanov and the State of Soviet Union had created in the shape of Chernobyl.

While man can blame others for his faults, this time man can complement himself for work he did which saved millions life.

Their stories are dead with Chernobyl but to those who were survivors of Chernobyl, these men remain hero and would remain so till time stops. 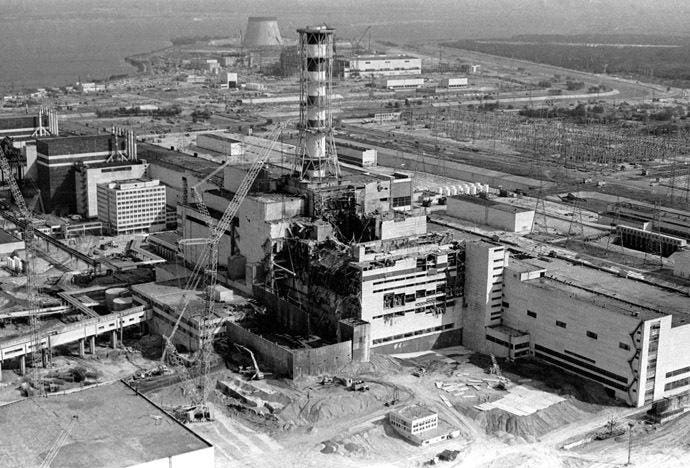 One thought on “ I Serve the Soviet Union: Story of Men Who Cleaned Up Chernobyl ”